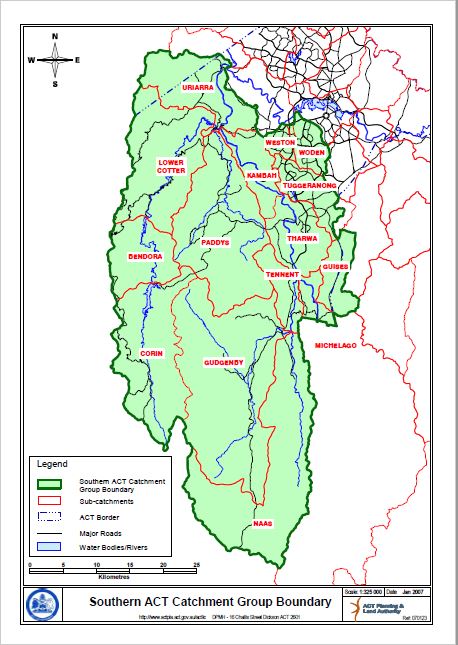 such as a river or into a specific body of water. In human geography however, a catchment area is defined as the area that services or attracts the surrounding population, for example a local nature reserve has a geographic area from which the community is able to benefit from the natural resources through physical, social or mental wellbeing. This area is not limited to the reserve itself but also the surrounding neighbourhoods that may benefit from linkages with the reserve.

In our case the southern ACT catchment area has been redefined to enable community participation in the management of this part of the Upper Murrumbidgee River Catchment. Our catchment boundaries are based upon the sub-catchments outlined in the ACT Government’s water resources strategy, Think Water Act Water – a strategy for sustainable water resource management, and includes the original catchments outlined in the Woden-Western, Tuggeranong-Tharwa and South-West ACT sub-catchment plans.

The map below outlines the southern ACT catchment area and its 14 sub-catchments. It is important to note that in several areas the SACTCG has redefined the watershed catchments to include the social catchment. This was done to provide a more effective administration of the catchment area for both physical and human geographic needs.

The southern ACT catchment consists mainly of rolling grasslands and is bounded to the west by the Australian Alps, with the peaks of Mt Bimberi, Mt Ginini, Mt Franklin and Mt Aggie forming the western border. To the south-west the catchment joins Kosciuszko National Park and the Bimberi and Scabby Range Nature Reserves with Brindabella National Park on the north-western border.

Mt Clear borders the southern most area of the catchment.

The Murrumbidgee escarpment cuts across the catchment from south-east to north-west with the rural and urban areas to the east and two belts of mountainous terrain separated by the Cotter River valley to the west.

Land use categories in the southern ACT catchment area have been divided into the following three areas: conservation areas, rural lands and urban development. Conservation areas refer to landscapes that hold both natural and cultural values such as Canberra’s National Parks and Reserves and Heritage sites. Rural lands are defined as any land or property that is used for agriculture, including rural leases. Plantation pine forests were a significant land use within the southern ACT catchment area until the aftermath of the 2003 bushfires. The ACT Government has agreed that there will be no more commercial or broad-acre pines in the catchment. The 1,285 ha of existing pine plantations will be managed on a non-commercial basis and liquidated when it is feasible to convert the area to a primarily, native vegetation cover. Water catchment will be the primary land use for the Cotter catchment. Urban development includes the residential area, services centres, industry and supporting infrastructure.

Namadgi National Park covers 105,900 ha, making up more than half of the ACT. Declared as a National Park in 1984 it is now a sanctuary protecting all animals, plants and cultural sites within its’ borders. To the south-east the park joins Kosciusko National Park and the Bimberi and Scabby Range Nature Reserves and on the north-east boarder joins Brindabella National Park. The park has a wide variety of conservation habitats that range from the broad grassy valleys to snow gum woodlands and subalpine wetlands and is zoned to accommodate recreational opportunities such as camping, recreational driving, cycling, horse riding, bushwalking, rock climbing and abseiling.

Tidbinbilla Nature Reserve is 5,450 hectares on the border of Namadgi National Park. The reserve consists of the valley floor where most of the recreational opportuinities for visitors are located, and the protected areas of the Gibraltar Rangers and Tidbinbilla Mountain. Tidbilnbilla is home to the Birrigai Rock Shelter, the oldest Aboriginal site within the ACT.

Canberra Nature Park Reserves range from bushland hills to some of the best examples of lowland native grassland in south-east Australia. The reserves contain some of the best examples of Yellow Box-Red Gum Grassy Woodland left in Australia. This type of woodland is an endangered ecological community. It is home to a number of rare or threatened species such as the Hooded Robin, Striped Legless Lizard and the Button Wrinklewort.