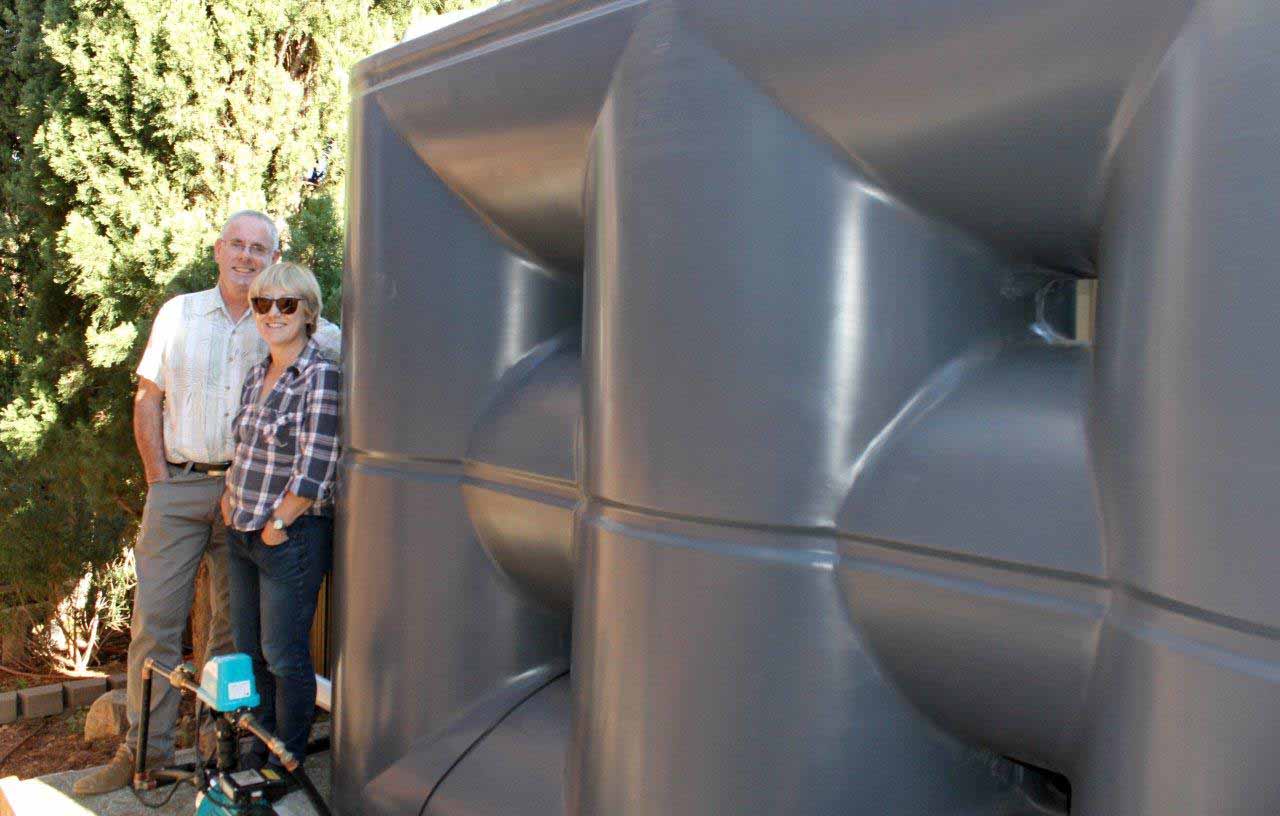 Could you tell us a little bit about your house and garden? 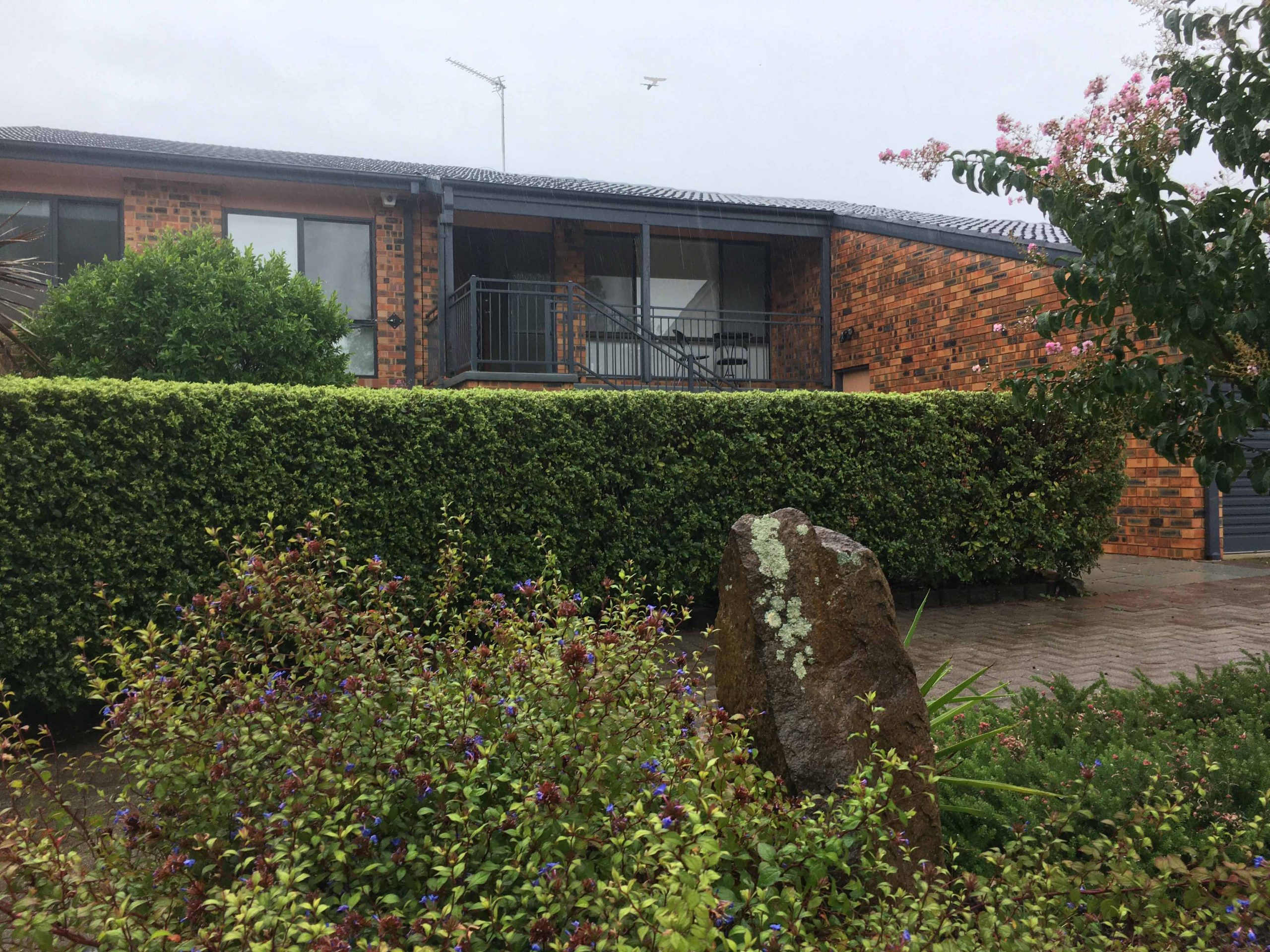 We bought our house in 1990. It sits on a 900m2 block on the uphill side of Hambidge Crescent  Chisholm,  in the same street as the shops and local primary and secondary schools. It slopes towards the road, which has brought challenges in terms of keeping storm water on our property.

We have a keen interest in gardening, ecological sustainability,  and urban self-sufficiency, and really  enjoy the knowledge and benefits that gardening brings.

We have tried to make our yard into a little working property, by growing our own fruit and vegetables and tending our chickens who free-range during the day in an enclosed area along the back fence. They  provide us with eggs, manure, kitchen waste disposal and hours of entertainment.  We also have a bee hive which provides us with honey;  a polycarbonate glasshouse  and a shade house for raising seedlings and growing orchids; and a worm farm and composting area. 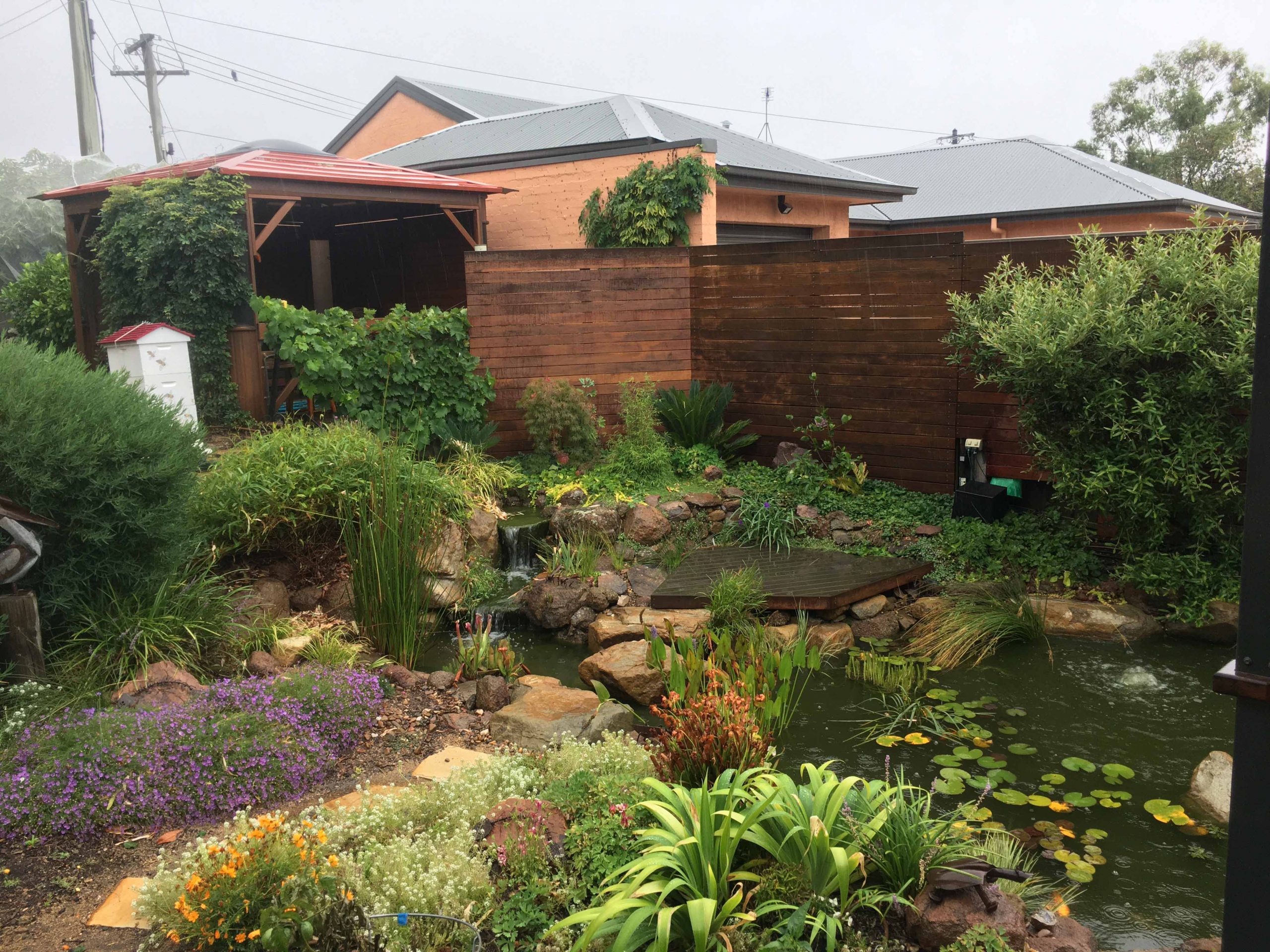 Our productive trees include  fig, quince, feijoa, apple, lemon, lime, pomegranate, apricot and plumcot. We also grow raspberries, blackberries, red currants, strawberries, rhubarb and cherry guavas. Vegetables are seasonal, and have included broad beans, peas, chard, lettuce, rocket, onions, beetroot, carrots, parsnips, asparagus, radishes, chillies, tomatoes, zucchinis, potatoes and whatever else we can squish into the tiny garden beds! Everything is done on a small scale, but seasonal crops still manage to exceed our demand, and the surplus is shared with friends and neighbours.

A curved hedge out front provides privacy and sound-muffling from the main street. Side privacy screens were installed as the properties either side of us were developed into dual occupancies. The koi pond has been our biggest investment, adding serenity and sanctuary. Birds come down to bathe in the waterfall, and bees sip the moisture from around the edge. Pitcher plants do well there too, and garden art adds extra interest.

How long have you been working on your garden? 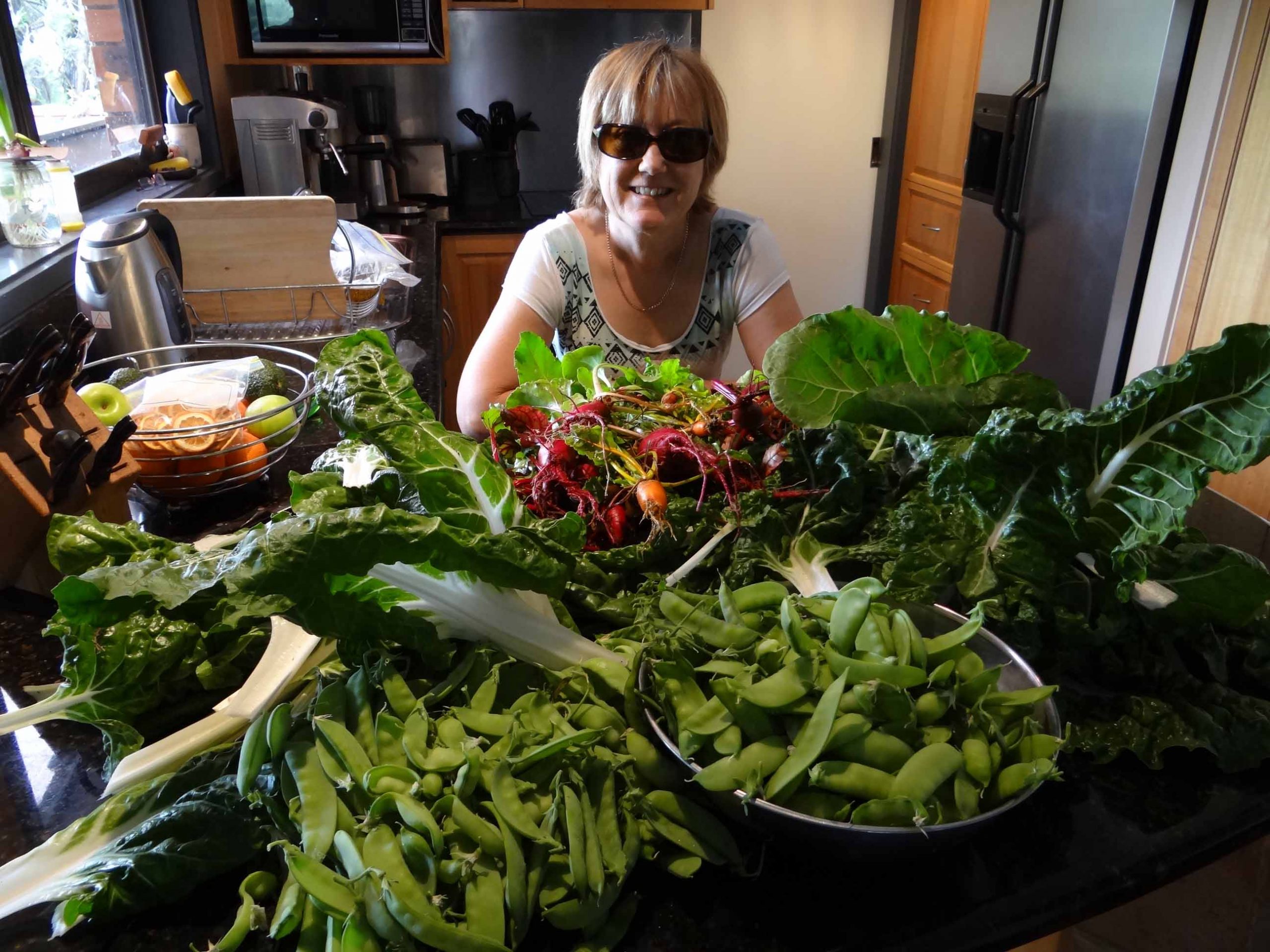 We have been working on our garden for some 30 years, and it has evolved quite a lot over that time.  The main infrastructure (curvy cement paths, split level backyard, semicircular driveway) was already in place when we moved in.

The original grounds were perfect for our two young daughters, with plenty of lawns to run around on; a swing set on the top back level; a sandpit on the lower level (where the pond now is); a cubby house (now used as a garden shed); and a fairy garden out the front (now enclosed as a craft room known as ‘The Burrow’).

As they  grew up, the swings and sandpit went, and a gazebo-enclosed hot tub and a shaded barbecue deck became more appropriate additions to the yard. With water restrictions, the lawns became mulched gardens and paved areas – with the exception of one small patch of grass saved for nostalgic reasons.

While we both worked and raised our family the garden received only minimal care, but was always a well-loved respite. Now that we’re both retired, we have made it  into a little oasis in which to relax.

Why did you apply for a H2Ok grant? 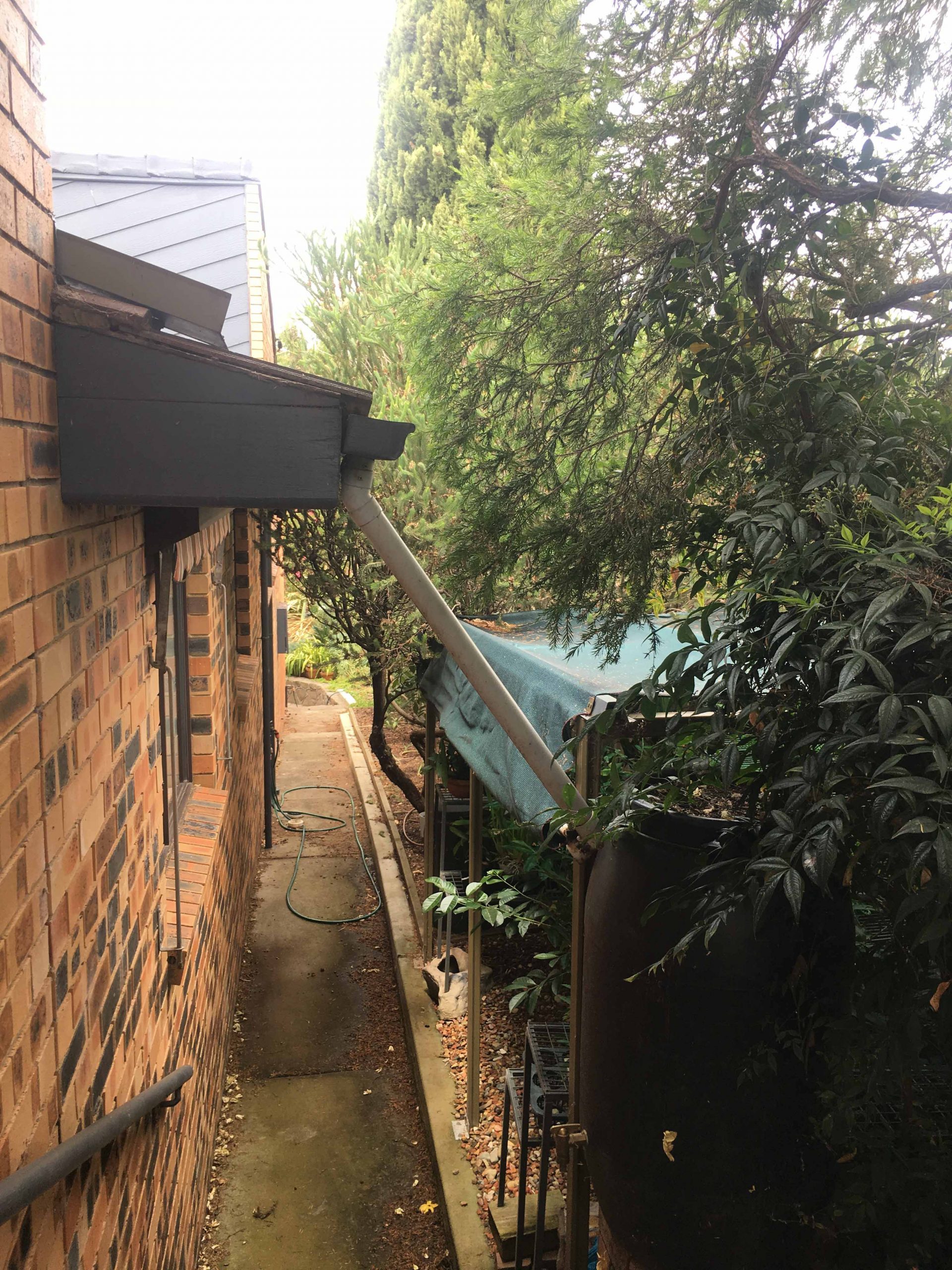 We applied for a government grant under the H2OK initiative to improve water catchment, utilisation and run-off from our property. We already had some initiatives in place such as tiered garden beds to help slow run-off, and an antiquated drip irrigation system. However, in heavy rain, water would still stream downhill, cutting a channel through the nature strip and depositing any of our attempts to mulch the area down the road. The irrigation system kept splitting, and our only means of collecting and retaining rain water was a make shift poly pipe running into a re-purposed olive barrel.

What did you use the H2OK grant for?

We used our H2OK grant towards  installing a 5000 litre rainwater tank, replacing irrigation tubing and re-vegetating the nature strip to absorb run-off from the neighbouring property. We also had a large pond installed . This is not only an aesthetic feature, but provides a catchment area, a home for our koi, and a drinking hole for our bees.

Could you describe the before and after of your nature strip and whether the planting has had any impact on how water flows? 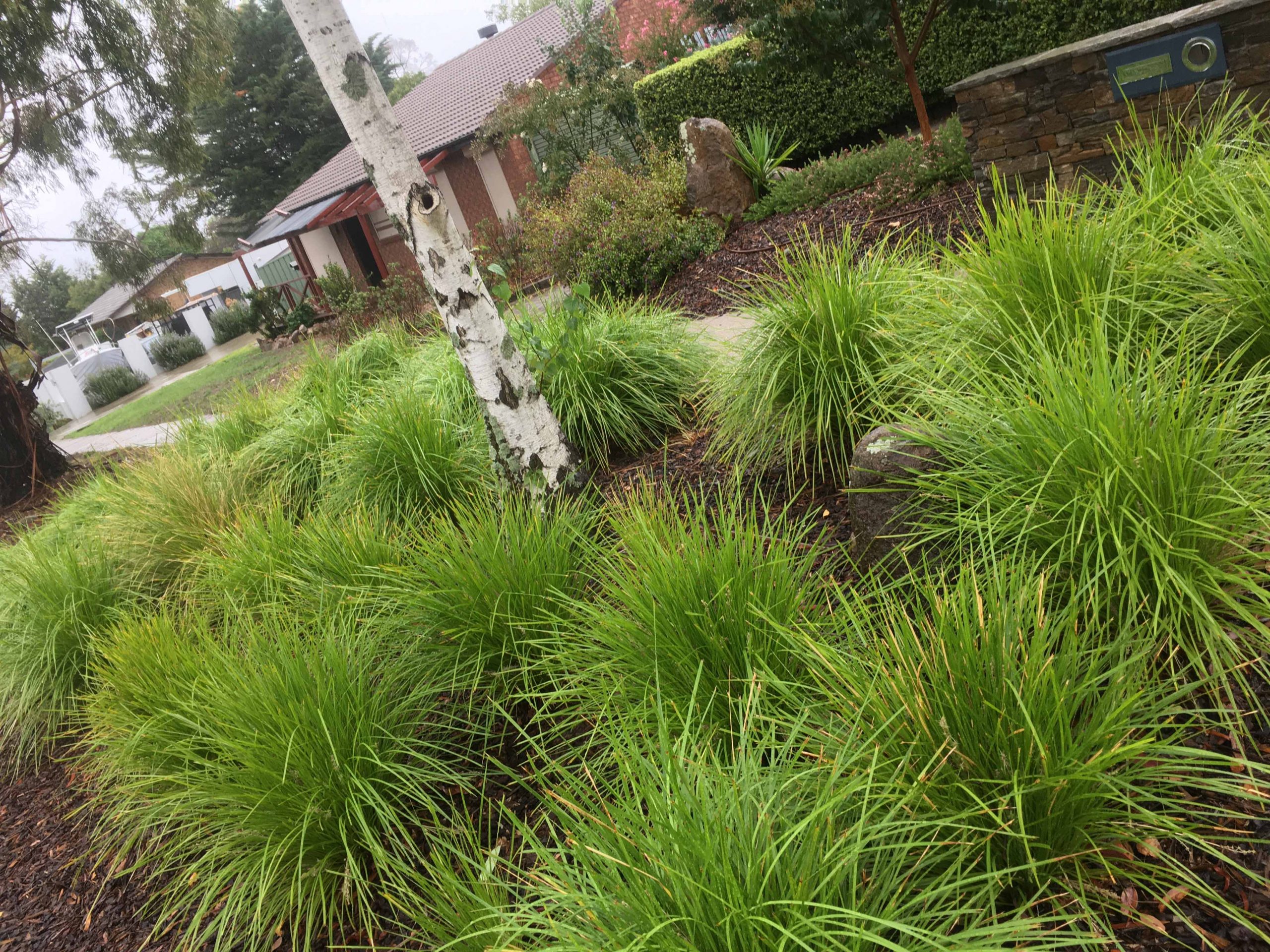 Our nature strip was originally covered in  compacted scoria, which was not very permeable. When it rained, water would stream down across it and onto the road. This became worse when the property next door was developed into a dual occupancy block, and was basically  concreted from front to back. We got their run-off too, and attempts to alter the flow of water using bricks as a barricade proved futile.

The problem was solved by removing the scoria, digging out the compacted clay and replacing  it with better soil. The area was then planted with Lomandra (variety Majestic Little Pal) which has thrived. The roots of these plants have bound the soil, and water is now trapped on the nature strip rather than running onto the road and down the storm water drain.

What’s your favourite part of your garden?

Our favourite part of the garden is our water feature, a  4.5 x 3.5m pond with a small waterfall. It was designed  by Waterscapes Australia, who  prepared the area with a robust rubber liner to prevent leakage. The installation of bioballs, skimmers and filters has made it quite low maintenance.

The pond is planted with aquatic plants and stocked with koi. It can be seen from the kitchen window and the back deck, and instils a peaceful ambience to the yard. During the hot dry summers it provides a sanctuary for thirsty birds and insects, and it has added significantly to the biodiversity of our little urban retreat. 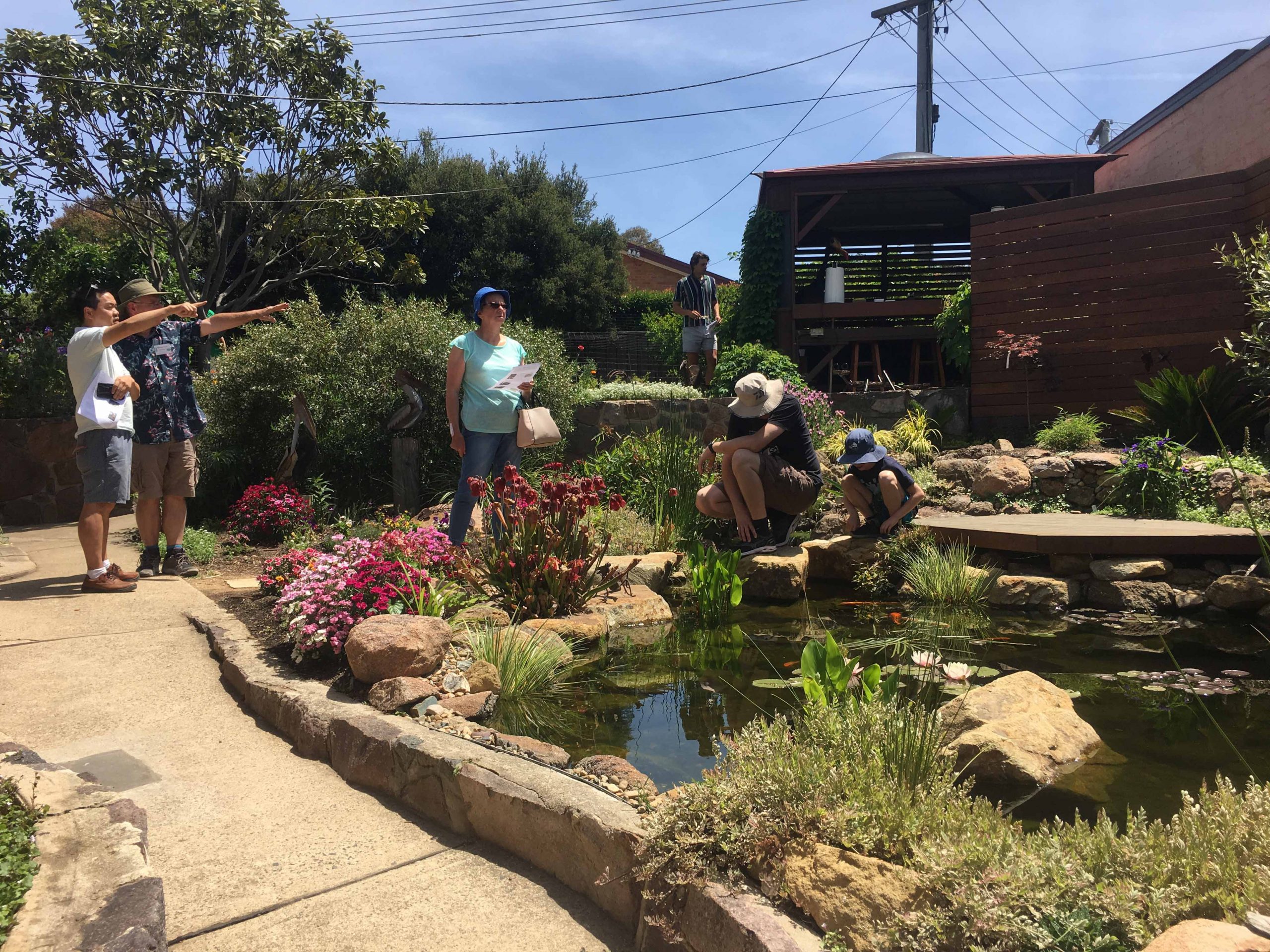