The ACT landcare Awards took place on Sunday the 17th November 2019 at the beautiful Lambrigg Property on the Murrumbidgee River. Land Carers from across the ACT came together to celebrate the years achievements for the environment.  The awards celebrate the incredible efforts of individuals and groups, young and old, to protect the ACT’s natural resources, stewarding a more resilient landscape for the future. The award winners and their projects are diverse, from farming and indigenous land management, to educational and mapping tools. The Winners of the ACT landcare Awards will go on to represent the ACT at the National Landcare Awards in Sydney next year.

Some big wins to note in the Southern Catchment: 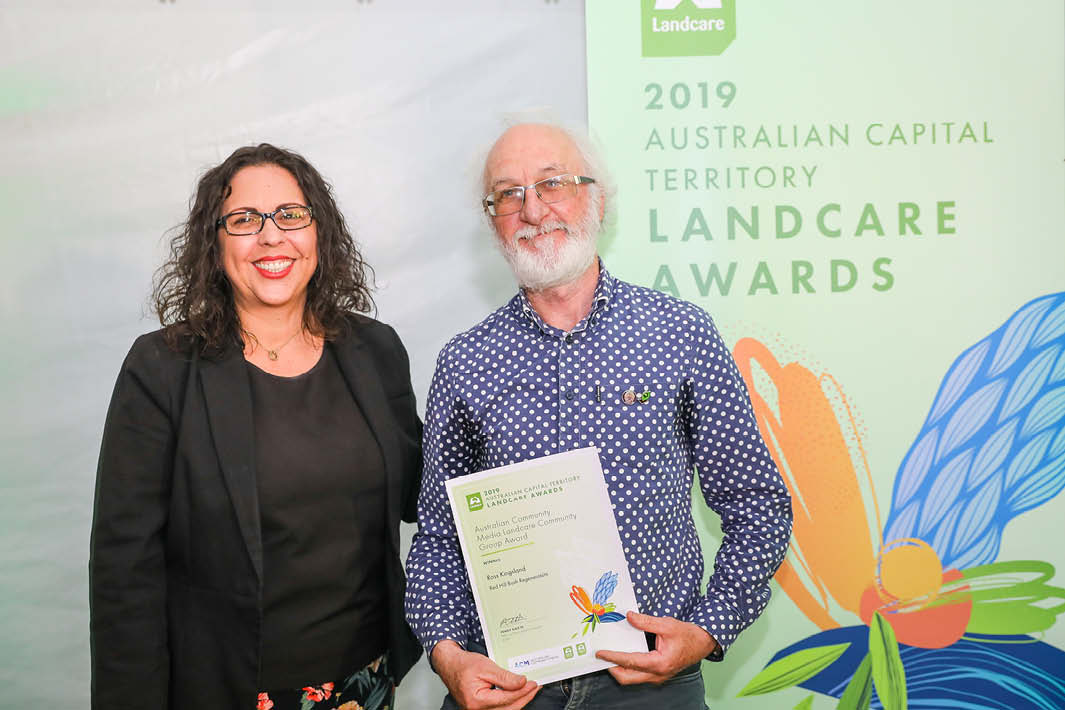 Red Hill Bush Regenerators – The Red Hill Bush Regeneration Group (RHR) are a volunteer group established in 1989 committed to restoring the native bushland ecology of the Red Hill Nature Reserve, one of the largest remaining remnants of endangered Yellow Box – Blakley’s Red Gum grassy woodland in Australia. When the group formed in the late 1980s, weeds covered more than a third of the reserve and woody weeds formed massive thickets. The hill was so devalued that rubbish dumping along the road in the reserve was a common occurrence. The regenerators have spent 30 years transforming the rubbish bush to nationally significant woodland , and today thanks to the many thousand volunteer hours, Red Hill boasts one of the largest, most diverse, best condition remnants of box-gum woodland in Australia and brims with over 50 regionally rare or threatened species. 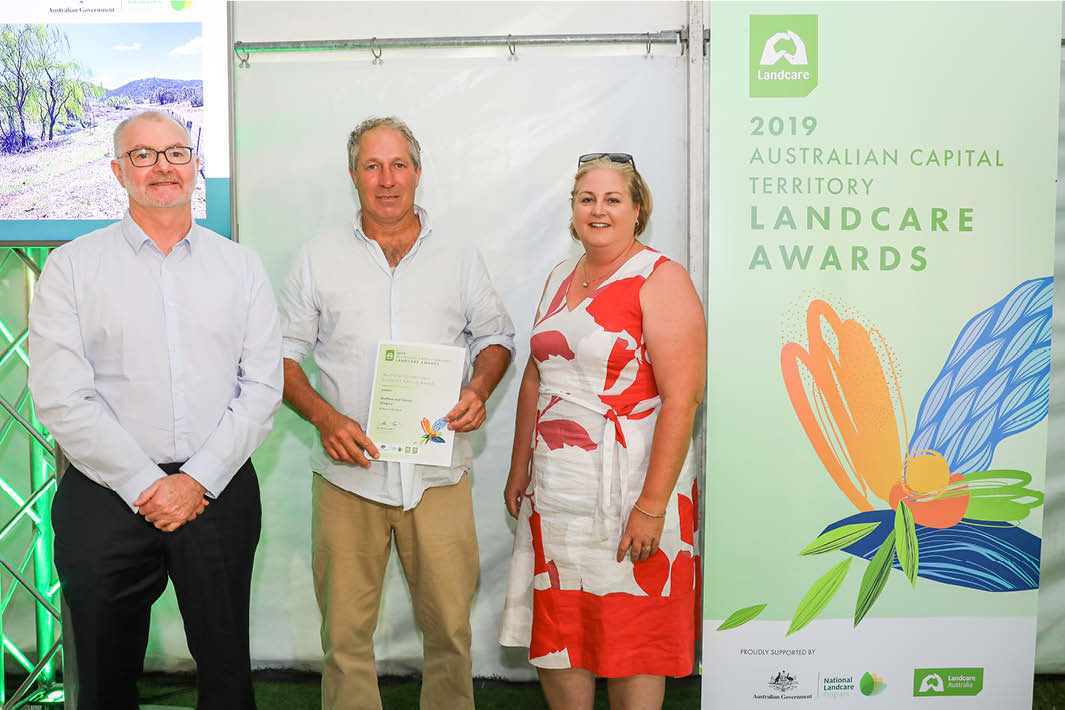 Matthew and Sharon Gregory – After purchasing Willow Vale, a property including part of the fertile valley floor of the Gudgenby River near Tharwa, Matthew and Sharon Gregory were determined to increase productivity of the most suitable grazing country while enhancing overall environmental health through weed and pest management. Located near Namadgi National Park (NN Park), they pointed their efforts at the ‘inaccessible’ pasture land along 450 metres of Gudgenby River frontage over an area of approximately 5 hectares. Rendered useless and unmanageable by 40 years of fencing out, the riverine corridor had become choked by blackberries, basket willows and other trees and weeds enabling feral pigs and foxes to proliferate. ‘We used an ACT Government Environment Grant through the Southern ACT Catchment Group, to help fund removal of pest plants,’ Sharon explained. ‘It entailed coordinating work to undertake spraying, weed removal and tree planting, and collaboration with our adjoining neighbours along the River and NN Park staff.’ 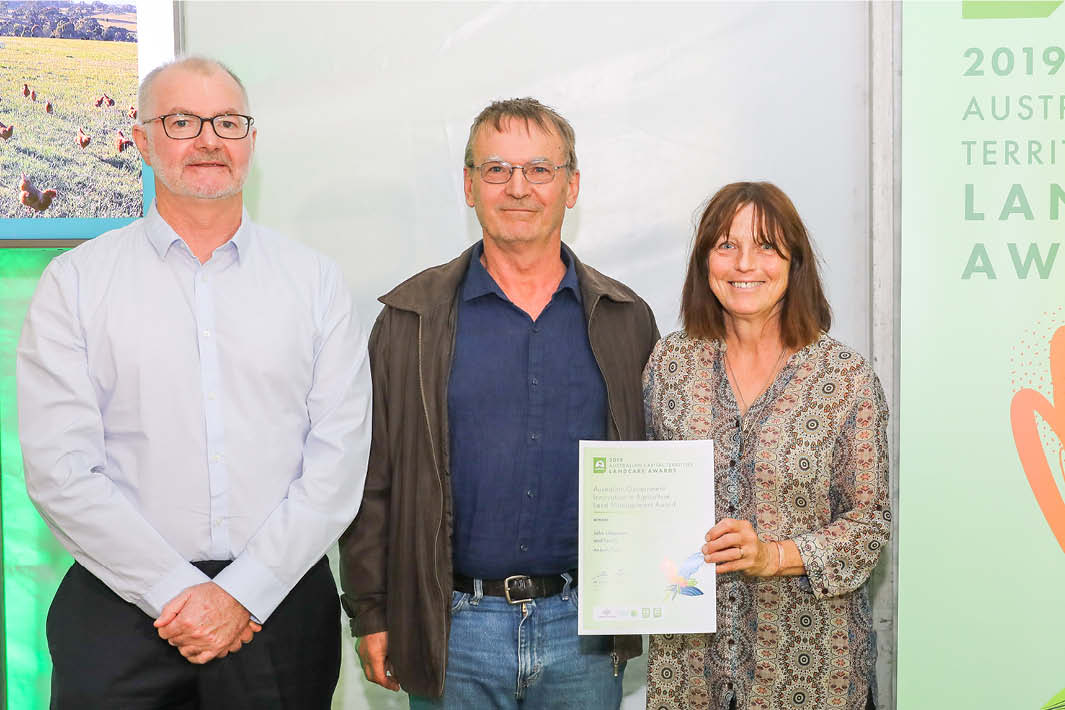 John Lilleyman – The Lilleyman family were new to farming when, 7 years ago, they took over Amberly Farm in Kambah. The beef cattle operation from that time was based on set stocking and drinking water for stock depended entirely on rainwater fed dams on the property. Picking up the beef business from scratch presented a steep learning curve but at the same time offered the opportunity to see everything with fresh eyes, to question all assumptions and use first principles to develop their farming methodology based on a willingness to take on evidence-based practices. Amberly Farm now operates as a multi species strategic grazing enterprise, managing vegetation for increased forage production, animal health considerations, reduced fire fuel loads, better wildlife habitat and noxious weed control.  Benefitting from its prime location with large customer base on its doorstep the farm produces pastured eggs and garlic for the local chain of Independent Grocers across the ACT and farmers markets complimenting the beef cattle operation.

It should also be noted that SACTCG’s chair- Miranda Gardener- was Highly Commended for the Landcare Community Group Award.

2019 was a huge year for Landcare, with many great projects completed, and many more to come. It was a pleasure to be able to work with the Red Hill Bush Regenerators, Matt and Sharon Gregory at Willow Vale and John Lilleyman at Amberely. We look forward to supporting fantastic groups and projects like theirs into the future.