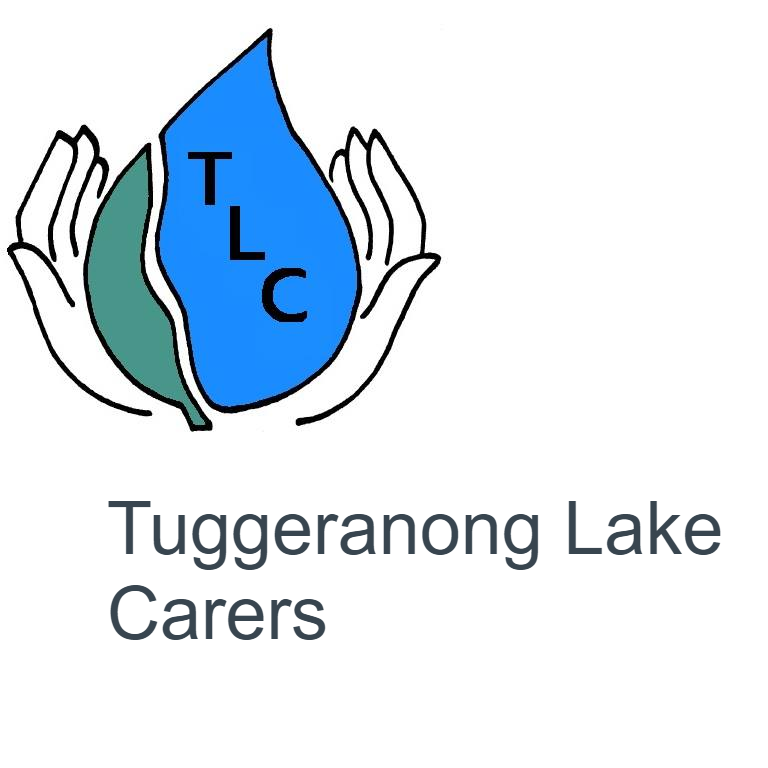 The Tuggeranong Lake and Catchment Carers are a community group striving to make Lake Tuggeranong and its surroundings a cleaner, healthier and better place for people to enjoy and wildlife to thrive.

Tuggeranong Lake Carers formed in 2012, led by Glenys Patulny to highlight the many problems with the management of Lake Tuggeranong.

The TLC Group meets ad-hoc to run clean-ups and participates annually in Clean-up Australia Day at the lake.

They meet at the Lake Tuggeranong Sea Scouts Hall.

Below is an article in the Canberra Times about the Tuggeranong Lake Carers:

A small group of dedicated enviro-warriors gather along the shores of Lake Tuggeranong with gloves on and clean-up bags in hand.

On the surface, under the warm spring sunshine, Lake Tuggeranong glitters pretty in an almost-inviting silver.

Discarded: Pollution on the shore of Lake Tuggeranong on the clean-up day. Photo: Graham Tidy

Two glossy black swans and a bevy of inquisitive cygnets dodge submerged shopping trolleys, while ducks and swamp hens wade in the shallows between empty plastic bottles and fast-food litter.

Despite the sun’s welcoming disguise, more sinister things lurk below the surface.

James Fletcher, of Wanniassa, and his daughter, Emma, 6, collect rubbish at the lake. Photo: Graham Tidy

Wanniassa resident James Fletcher and his daughter, Emma, 6, wander along the shoreline, eyes peeled for litter on or around the lake’s edge.

Proud dad James beams at the mature and simple response, a love of nature is something he has obviously helped foster in his young daughter.

“We come here a lot. I kayak, my wife runs around and we like it a lot as a feature. It would just be good if it could be cleaned up, and we figure we’ve got to be part of that.

“It is part of being an engaged citizen,” James says.

“You can’t complain about it, you’ve actually got to do something, get involved.”

James, although not officially part of the Tuggeranong Lake Carers, says he is passionate about improving the lake’s quality.

James said he and Emma spent two hours last Sunday picking up a lot of plastic bottles, McDonald’s trash and even some yellow syringe containers.

“I kept them away from Emma, but it makes you wonder if it’s just run-off or if someone has gone and chucked it in there.

“We got two bags pretty much full to the brim with rubbish, so that was kind of rewarding. It just shows how much the lake needs the attention.”

James understands it is not just the litter on the surface that needs cleaning up.

“The lake is sick because of all the stuff going into it … my understanding is if you could get plants that are drawing the nutrients out of the water it will stop it flushing into the lake.

James would like to think that one day his daughters, Emma, 6, Sarah, 5, and Rebecca, 2, can safely swim in the lake.

“The more attention it gets, the more it will galvanise it as an issue and have the community get behind it,” he said. “I really commend the people who organised it. You’ve got to start somewhere, and hopefully this starts a bit of a groundswell of support.”

The woman behind the clean-up was Tuggeranong Lake Carers convener Glenys Patulny. She started the group two years ago, “basically, to put pressure on the government and highlight there is a problem”.

“We had people complaining about the smells of the lake and it’s been closed through summer for the last 12 years. It really clicked to me how it has been an ongoing problem for many years and nobody seems to do anything about it,” Glenys said.

The group came up with a number of issues to address, including the need to promote the problem, provide education to the community and local schools about the causes of the problem, and address the often overflowing waste in the gross pollution traps.

Twice a year the ACT government empties 17 traps in the Tuggeranong catchment area. A Territory and Municipal Services spokeswoman said the traps were particularly useful for removing sediment and floating objects before stormwater filters into into the lake.

But the Tuggeranong Lake Carers think more needs to be done.

The group welcomed an announcement in February of up to $85 million of federal government funding to restore the health of Canberra’s lakes and catchments.

The ACT government is required to commit 10 per cent of the commonwealth’s spend.

“It’s a four-year project, but the first two years are monitoring. Our frustration is the lake has been closed [sporadically] since 2002, we’ve got pictures of this, what more do you need. The federal government, which is providing the money, wants proof. From our point of view, its work we’ve already done,” Glenys said.

The Tuggeranong Lake Carers recently put together a petition, which received 3000 signatures, to remind the ACT government the community wants them to go through with the election commitment to provide four new wetlands at Tuggeranong, Yarralumla and Ginninderra by next June.

“The government knows the issues here,” Glenys said. “Every time the lake is closed, you get other people popping up [to complain]. If dogs swim in the lake, dogs have died from the blue green algae I’ve been told.

I know people living in Greenway who will always have the windows shut because of the smell. The government’s done up the beach at the lake, but nobody can swim in it because it’s always shut.”

The funding to improve the quality of Canberra’s waterways was secured as a key item in the parliamentary agreement between the Greens and the Labor Party. Although pleased with the announcement, Molonglo MLA Shane Rattenbury said the money would not be a quick fix.

“Canberrans really appreciate the recreational and environmental value of our waterways … we like to walk, swim and play in these areas, but no one likes it when they can see rubbish, smell pollution or have to wade through algae,” he said.

The widely accepted notion that implementing wetlands upstream will help improve the water quality is the key focus for the Tuggeranong Lake Carers.

Glenys understands six wetlands would be the ideal number for the lake, although she would also like to see the “contaminated” sediment at the bottom of the lake removed.

“If they dredge the lake and do the wetlands, and I’m not an expert here, I could see it in better quality in maybe 10 years. That’s a pure guess, but I think you’ve got to do them both.”

Glenys said she organised the clean-up because the lake needs regular maintenance, not just for the amenity but for nearby residents’ health.